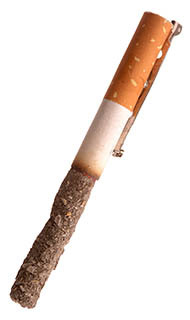 It wasn’t so much the burning in her chest or how her eyes watered, nor was it the way her hands had developed this terrible palsy in public, the shaking hands of a much older woman, or how she felt increasingly sensitive to subtle shifts in temperature—the slightest warmth brought sweat to her throat, the suggestion of chill would twist in her spine, like the first warning of flu. And it wasn’t that her tongue felt thick and useless—unable to taste much of anything, let alone describe the changes in her body—nor was it that odd awareness of the softening skin around her belly, the backs of her arms, the folds on her neck where her chin came to rest when she was reading her magazines or watching her talkshows. And it wasn’t how normal sounds had become noticeable and unnerving—the clicking teeth of her co-workers, the wet breath of the woman who sat in the seat beside her on the subway that morning despite it being a mostly empty train, the uncrinkling of the receipt from dinner the night before, fishing it from the bottom of the bag and wiping the spilt Hoisin sauce off in a vain attempt to discover whether or not they had forgotten the goddamn bok choy or if she’d just forgotten to ask for it in the first place. And it wasn’t the smells: no, it wasn’t the smells, but weren’t they queer, the way she’d begun to distinguish between the high sharp notes of urine and the lower diffuse tones of general rot, that overripe smell of the city baking itself in the summer heat, mulch and rinds and waste and sulphur and wet rust and disintegrating bones and blown circuits and sick pigeons and poisoned rats and hundreds of years of ground-in filth—her grandparents’ filth, their grandparents’ filth, geological filth, filth you could excavate and use to measure time, filth so old it had once carried fucking smallpox and had aged all the way to sterile. And it wasn’t the way she’d found herself crying in the shower, or on the toilet, or, worse, in the toilet at work, tearing at her desk, welling up over tasteless Chinese at 10 p.m. or at the talkshows or at her screened calls or out of frustration at never being able to scrub the mould out of the fucking grout in the fucking bathroom which was the fucking size of an animal pen but only appropriate considering how small the rest of her apartment was, and wasn’t great that she had snatched the place up before real estate had really gotten out of hand—seriously, fuck her fucking apartment. And it wasn’t the way the oddest things struck her either, like the time she’d noticed how the light of the blue vapour bulbs caught in the rain dripping off the paper lanterns outside a St. Marks yakitori and spilled blue electricity into the street, or the boy in midtown with the jawbone and black hair who had a huge vertical sore between his pretty black eyes, a red and ragged thing that only made her want to kiss him, to taste it—it wasn’t the way those things struck her, nor was it her knowing that those things were striking her in a way that wasn’t normal.

When her cell rang this time, she picked it up. Even if it was Lise calling to tell her how lucky she was she’d put down 20 percent in 2003.

“Lise, thank God. Thank God it’s you. I really need a cigarette. I am fucking addicted. I mean, I really think I am a fucking addict. I’m losing my fucking mind. No, really. Yes—what? Are you laughing? Why the fuck would you laugh at me? What’s so goddamn funny about this? What’s so goddamn funny about smoking? This is a serious business, Lise. This is a serious fucking business and it’s no laughing matter for you.”